We got the new kayaks out on the water today, with the air temperature at 70F but very cold water. The first efforts at paddling told us that we will be using different muscles with the flat leg positions in these Greenland kayaks.

We both tried rolling, but we had forgotten to "burp" Trudy's dry suit. With her dry suit all inflated, all she cold do was a same-side roll. I had a little difficulty getting over as well, but made a full roll. The cold water induced brain-freezes limited us to one rolling session each.

As expected a days worth of details followed yesterday assembly of the big pieces. 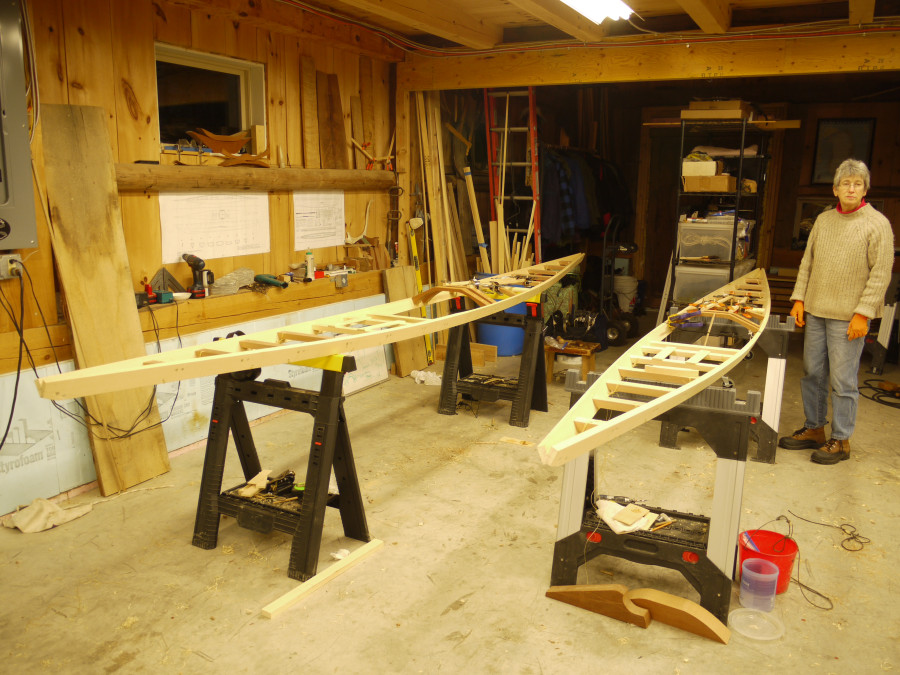 The major pieces in this picture are much the same as yesterday's, but all of the temporary lashing has been replaced with the final lashing, and all of the wood dowels are in place and trimmed. Tomorrow we start forming the ribs for the kayaks.

For those new to this posting, we are at Kayak Ways in Brownfield ME, building skin-on-frame kayaks. Pictured, along with the kayaks to be, are Trudy Phillips and Turner Wilson in the background. 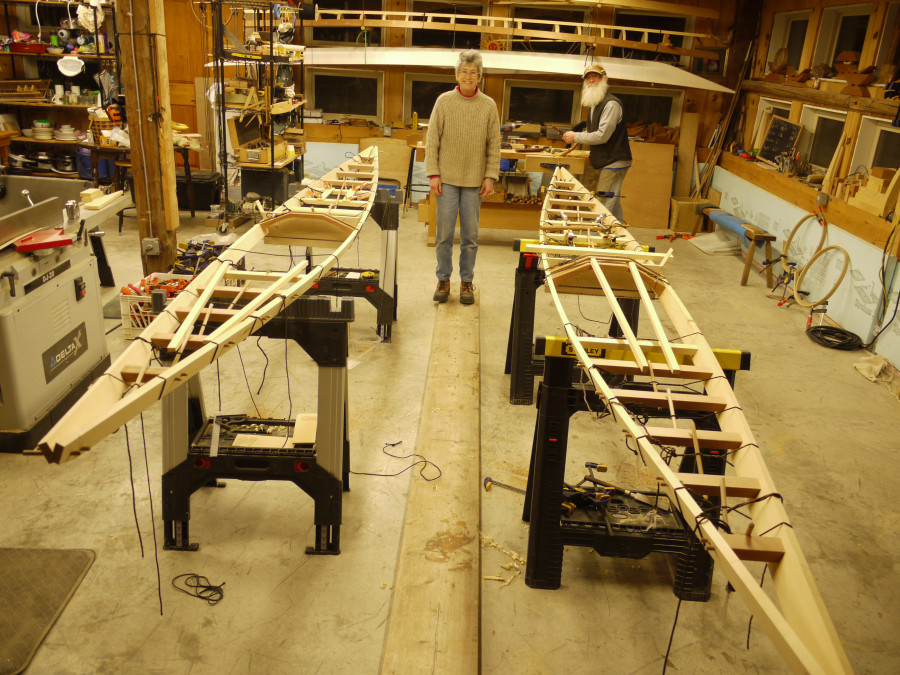 His and Her kayaks The boats now have almost all of the deck beams cut and anchored in place with wood dowels. Tomarrow we will spend the day lashing each end of the beams to the gunnels.

I fear that this is a lot like building a new house; adding the big structural components goes pretty fast, and then the finishing detail work seems to take forever.

OK, the great kayak adventure is to build traditional Greenland style, skin-on-frame kayaks for each of us. Building the kayaks should take approximately 10 days, but at the end of day 1, the outlines of the boats are already there, 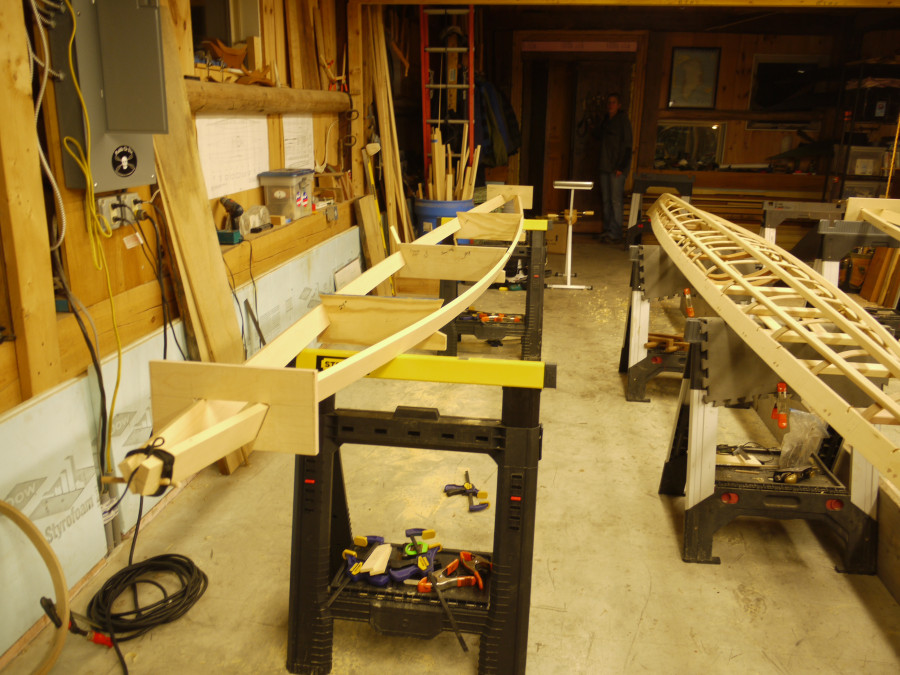 Shown are the gunnels pinned with wood dowels.

We are on another great adventure (pictures to follow in the next two weeks). One of my friends has decided to retire from facebook for the moment. This is a test of cross posting to cover friends on both social networks.

Hint, we are in Brownsfield Maine.

The temperature in the city went well pass 100 F, so what to do -- spend the day paddling and rolling on a local lake. We spent nearly 6 hours on or in the lake. Rolling the kayak is coming along well for both of us, and the extended paddling did not hurt either. In addition to the rolls, we practiced re-entry from intentional wet exists (any excuse to get wet). We finished the day with Trudy making a great cold fruit soup for dinner, which I garnished with ice-cream.

For our hiker friends, "rolling" in this case is up righting an overturned kayak while remaining seated in the boat. Trudy and I have been struggling to master this for longer than I care to say. Yesterday, something clicked on and we were both able to roll. We went out on the river again today, and repeated rolls until tired, then paddled down an back up the James, and then repeated two more rolls. We did not do a wet-exit the entire afternoon.

We spent the long Memorial Day weekend camping in Hammocks Beach State Park on Bear Island, North Carolina. The park had both day trippers out for a day on the beach and overnight campers in well spaced primitive camp sites. Access to the island was either by ferry or canoe/kayak. On this busy weekend paddling your own boat was much better than waiting in line for a place on the ferry.

Late afternoon, on Friday we paddled the 2.9 miles to Bear Island. The slight incoming tide was against us, but we arrived at the shallow kayak access inlet at high tide. That was great with boats loaded with camping gear.

Saturday we did a 12.7 mile tour around Huggins Island, finished off with a side trip down to the islands ferry dock just to kill time until the tide began to rise. Almost universally the power boaters would throttle back while passing us.

Monday, we did the short paddle back to the mainland. Trudy had the luck to catch a fish jumping as she was taking a picture of an Egret. Enjoy the pictures:

As retirees with most of our in-town commitments on the weekend, we now take ski trips during the "work week". The pictures in the link below shows a trip out the Harmon trail, traversing the marsh and bog area besides the left fork of Red Creek, and then back the Dobbin Grade trail.

We joined one of the discovery tours out of White Grass. These are leisurely one hour snow shoe tours meant to introduce the general public to the natural areas in the Canaan Valley.
Collapse